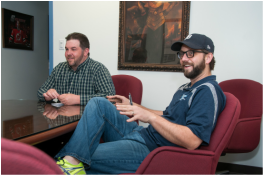 Adam: We grew up in Saginaw and went to Heritage High. We were acquaintances. It wasn’t until after we went away to two different colleges that we became friends.

We were both hired to paint the U of M House on Shattuck and recognized that we shared a strong work ethic as we stayed until 2 a.m. to get the job done. We also realized that we both really loved the Tigers and eventually ended up coaching Little League together during the summers when we came home from college.

Ryan: Adam convinced me he knew a lot more about this business than he actually did. We found out when we went to our first trade show that we were working with an antiquated system and had the whole wrong model compared to other people in the business. We had to start over with all new equipment.

During our first three months, though, we got our first big break when SVSU asked us to bid on 1000 shirts for their Battle of the Valleys. We won the bid but needed to make 1,000 shirts in just two weeks. Then they called and needed another 1,000 more in just one week.

Adam: I remember the police stopping by at 4 a.m. while we were trying to get the order done. They wanted to make sure we weren’t being robbed.

Ryan: That launched us. It pushed us and paid our rent for a few months. It bought us enough time to get the business growing.

We just invested in online software so you can have a team store online. It’s been a huge investment, but everything we bought has propelled us to the next level. It made it worthwhile. Everything has snowballed, and we had to move from our original small space to our new location.

Adam: I think during our first full year in business, we made about $9,000 each. We invested everything we had in this place.

Everyone told us not to quit our day jobs, but we didn’t listen.

Thank you to our Chairman's Circle Sponsors